I took a little break from working on my gardening cards as it is nigh on Rudolf Day at Sarn's.

Some of you may remember that when I was preparing my room for crafting while I was recovering, I put together a huge 12 x 12 woven basket full of Christmas papers, card stock, and embellishments. I had a good rummage around in there today and found a sealed plastic baggie with the makings of a non traditional card.  I think it was from a Michaels make and take and I believe they were demo-ing snowflake punches. Usually there are 3 or 4 projects and you move from table to table and give each one a go. I think I was in a bit of a rush and just took the baggie home rather than assemble the last card.

Or maybe it was just because purple is not my favorite colour and perhaps I just couldn't get into making it!!! I think it is from 5 or 6 years ago so I decided it was time to ignore my misgivings about the colour and just get it done. There was white gossamer ribbon in the bag...I substituted the silver string instead. Just when I had it finished  and photographed, thank goodness I enlarged the photo and noticed that the vellum had a mar on the surface. Sort of a dint! Drat!!! I guess that is what can happen when bits and bobs are stored for 5 or 6 years.

I had a rummage through my cardstock and found a purple that was pretty close to the cardstock on this card. Luckily I had some rub-ons in that big basket... so a Joy rub-on was applied to a snippet of copic paper (the only white I had left in the house)  and backed with a snippet of the purple card. I carefully placed it over the dint and problem solved.

As I was basking in a glow of thinking on my feet, I noticed that the whites looked off. Drat! Why does that happen with whites. They can only be a tad off and it looks like neon! My first thought was to take a pale purple copic pen and colour all the whites to match but I didn't think it would go over the rub-on. I pondered a little more and remembered that before all my fancy  pens and tools, I started paper creating with a paper slicer, tape runner, pop dots and chalk.

A quick look into some drawers I haven't opened in years found my chalks and even some glimmer rub.
A quick chalk over all the white solved the problem (I think) and I even went over all the dark purple with an  ivory shimmer rub. The torn edge of the white cardstock took the chalk so much darker so I tried to tone it down with a quick dash of stickles.
Finally....A finished Christmas card, ready to enter over at Sarns Rudolf Day Challenge. http://stampingforpleasure.blogspot.co.uk/

Still not one of my favourites, but finished at last! 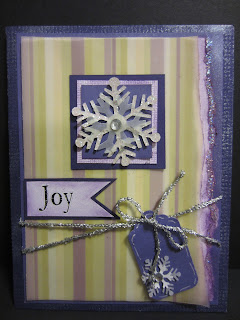 Email ThisBlogThis!Share to TwitterShare to FacebookShare to Pinterest
Labels: cards

It's gorgeous Maureen - so pleased you didn't give up! Love the purples too. Hugs, Di xx

Fabby card and also really appreciate your taking the time to come and comment too! yup its pretty amazing how few comments there are considering the number of entries but hay ho! we really appreciate the ones we do get! Thanks for Playing along with us this time at ABC Christmas Challenge, Samantha :0)

Well I think your card is just LOVELY. I am big fan of purple! Love your pretty embellishments too.

Thanks for joining in with my challenge. Good luck.

very nice - I like the non traditional colors too. Very soothing

Sounds like you had to do a lot of rummaging to finish off this card. But with 5 year-old stash, what a brilliant example of using scraps, bits and bobs, just floating around:) Anyway, I like what you've created, a beautiful clean design!

...loVe that snowflake it really pops out against the loVely bold colours on your background...Mel :)
Hope your feeling better with each passing day...X

Your card looks great to me. No one would be able to tell that you had anything but and opportunity for embellishments. Thanks for visiting my blog and leaving a comment. I'm not at home now but when I get there later tonight I will give you the page number of where I got the card. Hint: it is near the back and they are really advertising the SU score board.

Your card looks great to me. No one would be able to tell that you had anything but and opportunity for embellishments. Thanks for visiting my blog and leaving a comment. I'm not at home now but when I get there later tonight I will give you the page number of where I got the card. Hint: it is near the back and they are really advertising the SU score board.

Well Mo I love purple (as if you hadn't guessed yet) and think this card is gorgeous. Glad you persevered!
xx

I love this card. The purple is lovely. joann sassy raggedy

I like the card. he purple is great. Love all the snowflakes.

I think your card turned out great.
Good idea to tone down the white with your chalk.
I have never used chalks before, I just stick to my inks ;)

Your card is so pretty. The muted greens & purples are unexpected in a Christmas card, but very effective & clean. Like a painting in a gallery. Loved the snowflake and it was the perfect touch, along with the silver cording. Beautiful card, lots of details to look at. I LIKED it immensely. TFS and giving me some ideas to use different, exciting colors.

Great card - I have the hardest time working with purple - it is my least favorite color!

Glad you persevered, the effort was worth it as your card is lovely! I often tone done glaring white with chalk works like a hot darn!!
hugs
Glenda

Well I think your card turned out brilliantly.

I love snowflakes (nearly as much as hearts LOL!!) and I particularly like your little tag tied around your card.

Great idea to use your chalks.

I know what you mean about white card though. I have a drawer full of it and each piece seems to look different!!! It is as bad as black!!

Have a lovely weekend.

I love non-traditional christmas colours and purple is a favourite. I didn't know Michaels did make and takes i will have a lookout next time I am over. Hugs, Amanda x

Great card hun. I aleays love to see a less traditional take on Christmas cards and yours is just lovely! xx

Beautiful card, I'm glad that you decided to finish it up after it sitting for so long. lol I love non tradition colors for Christmas cards. Love your card!

It's a stunning card, hon, and well worth all the rummaging around and stick-to-it-ness that you put into it!!

This is lovely Mo!! I love well coordinated cards and this is definitely one of them.
x