Hi there. Once again, it is time for the Rudolph Days Challenge. Here are the rules for your perusal...

1. The Rudolph Days Challenge will start each month (January to November) on the 25th, and will close at midnight PST, on the last day of that month.
2. The theme is always Anything Goes, as long as it is Christmas.
3. One entry per person and you just need to enter one Christmas card or Christmas project.
4. You may combine your entry with other challenges (maximum of 10 in total).
5. Your card (or Christmas project) should not have been previously posted to your blog. It should be posted to your blog during the current months Rudolph Days Challenge, (between the 25th and last day of the current month)
6. Please link back to or at least mention, the Rudolph Days Challenge.
7. Please leave a comment on the challenge post.
8. The winner will be selected by random draw and announced on the first day of the following month. Prizes will be mailed anywhere in the world.


9. A special draw will be held at the end of the year, in December,  for all those who submitted a card or project every month that year, January to November.

I am sad to announce that I will have to suspend mailing of gifts until things are safer here in my area. Our province has relaxed things somewhat, but are still recommending if you fit the high risk group then follow the original rules. With so many people out and about now,  it is riskier to go to the post office to have the parcels customs sticker stamped. I do have everything here at home, customs forms, stamps, scales etc, but the customs form has to be stamped by the post office. I will mail them all out once this has let up to a safe level.

Our designers have been busy.

First up is Linda at Snail's Space blog

She has made this fun slider card. Love those frolicking critters! There are some great dies here and hopefully this card inspires some of us to try a slider card!  Bring on the Merry for sure!!!
Hope you will follow the hyperlink and pop over to Linda's blog to say Hi, learn about how she made this card, and leave her some praise while you are there... 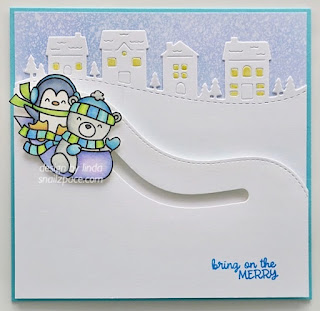 Next up is Jenny at Cardsarus blog.

Jenny has made this beautiful  winter forest silhouette against a lovely glittery background. I love the contrast here.
I hope you will click on the hyperlink and visit Jenny's blog to learn about how she made this card and leave her some praise too. 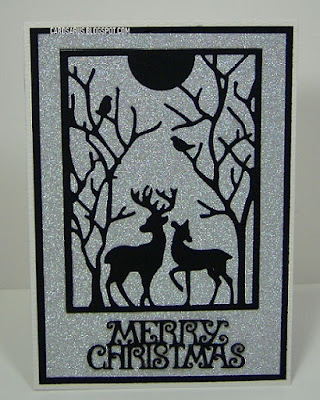 My card is a Bella image from LOTV,  coloured with pencil crayons and gamsol, I matted with a green dotted DP and matted again with a turquoise mirri card. The background DP is from Bo Bunny Christmas In The Village, and the two strips of dotted green paper are the leftover snippets from cutting the image mat. I gave them a heavy swipe of  Ocean Depth Blue, Versa Magic Chalk Ink along all the edges to make them stand out a little more against that colourfull bauble background. I even used it on the outer edge of the bauble design paper.

The Snowflake is from Hobby Lobby, and I popped a sentiment from Helz Cuppleditch's Wonderland series over that snowflake. 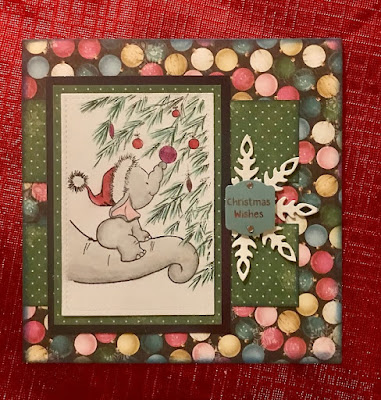 The prize this month is this Tutti Designs Forrest Friends Nativity die. 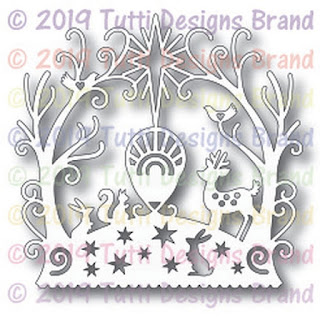 Snippets and a NBUS (at least I hope it is NBUS)!!!

I have had this post all typed up since before my neck got tight and sore. Still not sitting much in my craft room, but got the photos loaded so I could release this snippets card today.

Do you ever feel like you are drowning in snippets?  I sure do and so armed with my snippets boxes, I sat myself down to somehow use up a bunch of them.

First up, I did not have any pieces of heavy weight card stock to make larger cards, so I settled with making some random 4 to 5 inch square cards from some pieces of pale aqua Bazzil 110 lb card.

The embossed background is also a snippet that I inked up with some purple Momento chalk ink. I store embossed snippets, along with already cut full card backings in the same drawer, filed by theme.. That way I remember to use the smaller pieces. 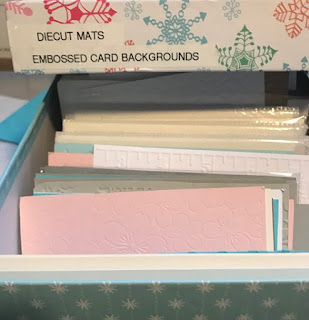 I used an unknown snippet of chevron DP for the border. Wish I had matted it with the aqua card as it kind of blends in too much.

That left me with the choice of smaller card fronts! I remembered a series of wee owls made with a Stampin' Up punch, that I have had for at least a couple of years now. I know I have used the blue DP owls before, but I do not remember ever using any of the other colours. Pretty darn sure the rest are NBUS. These owls are from my camping days up at the lake. I did not have room up there to bring a million tools. Just enough room for a slicer, big shot, and a very limited selection of dies.  I would always try to have pre-made embellies on hand. These punched out owls are left over from those camping days.
There are also  leafy branches in brown and in green with these sets...I think they are in one of the unopened matchboxes of owls. 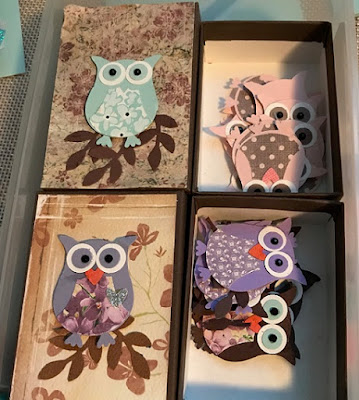 I remembered that I also had leftovers of an older Stampin Up kit (maybe they count as snippets too) and decided to incorporate those as well. Finally, I used some snippets of card to cut a larger circle for the background mat. I carefully displayed them here to show you the full panels, but there are many half used sheets and I chose from those ones first. Parts of this kit are NBUS too. 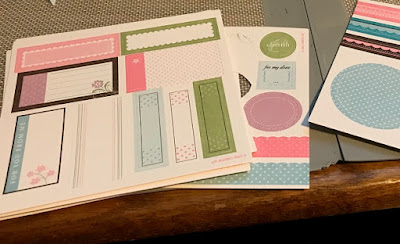 I chose the Hello sentiment as I wanted the cards to be fairly generic. I think it is a Spellbinders die . Just something nice to send during these isolated times, or perhaps use for a Rudolph Prize envelope. I had these already cut out as well (from the lake camping trip stash)... 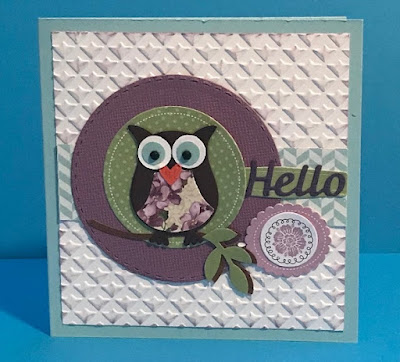 This card was perfect for snippets batch baking.
I am only showing you one card today, but I have cut and laid out 6 more, just have to assemble them today. As you can see from the photo below, I have laid out some with butterflies as well.
Now, to just sit and assemble! 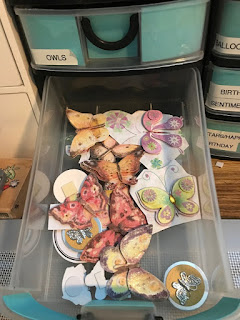 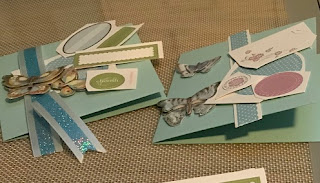 I am entering this card in the following challenges:

1. Pixies Crafty Workshop - must use snippets.
2. Darnell's NBUS Challenge - must use NBUS
Posted by scrappymo! at 11:51 26 comments:

We have a National  holiday and my kids and grandkids are away camping.  They are sending us so many lovely campsite photos. Prior to Covid, if they camped locally, they would invite us for a meal and Al would bring the boat there to take out all the campers for a ride or a tow... how the children loved this! They do not go to ordinary campsites, they use small campsites where you rent the whole place and then invite friends and their families to join you! Usually there are 5 to 12 trailers of friends, so lots of children!

Long gone are those days. Now, we would have to let them pick up the boat, and they will have to sanitize it before returning! Luckily, my son-in-law has his boating license, so we are able to loan it to them.

I usually draw the winner at midnight on the last day of the month, but could not manage to stay awake that long! Hence the draw this morning...

We had 52 lovely entries this month. While I have looked over all of them, I am only up to number 42 in leaving comments. I will get to you all, I just find it hard to sit and type right now. Neck still pinched, but slightly better than it was... 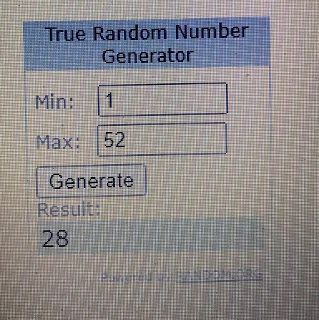 Shaz, could you drop me an email to let me know which die you prefer and also please include your mailing address. That way, I can get it into the addressed envelope so that once I have a chance to mail the prizes,  I will have everything ready!

Although one of the rules here is that entries must leave a comment, Shaz's comments go direct to my email.  I confirmed that she did indeed leave one this month as always!.
Posted by scrappymo! at 09:45 11 comments: