A couple of Xmas cards made at my Langley Stampers Club

After 3 weeks of Doctors appointments and yet still feeling a bit sick and run down,  DH finally made me go to hospital (on Dec 21st). I was admitted with a white count of 20 and a raging UTI.  I had been feeling poorly with infection since I sliced my finger open in November, so just kept telling myself it was from that.

Should have listened to my husband earlier!  Spent Christmas is hospital and finally got released this afternoon.  DH and my daughters visited as much as they could, but it is still a crummy time to be in hospital.

I had a few New Years resolutions planned but have instead decided to focus on good health for 2017.
I wish the same for all of you!

Here are a couple of Xmas cards I made at my Langley Stampers Club. It is always great fun to sit down and open up a package full of everything you need to create a card (or two) of the "teachers" choice. We rotate being teacher and it is always a lovely day out. Our November cards featured dies and embossing folders. 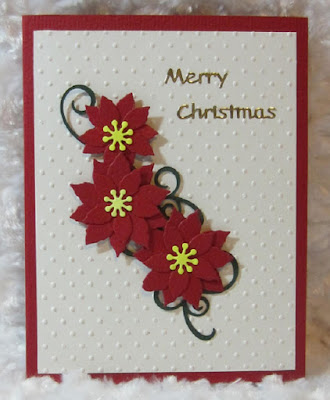 I think the white mat was embossed with Swiss Dots EF, but am not sure of the dies used here. I plan on bringing sticky notes with me in 2017 so I can jot down those details, affix them to the card, and be better prepared to blog them! 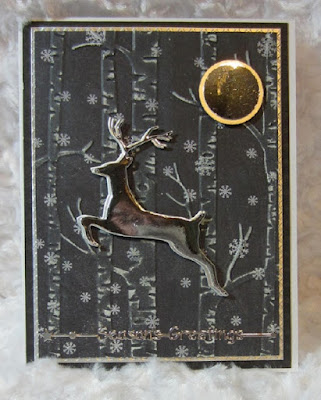 This card features a greyish blue mat that was embossed with birch trees and snowflakes. We sanded lightly across the raised image and revealed the whitish core of the cardstock.

The deer was die cut twice from the center of some silver mirri card that we used to mat the grey embossed trees. We also punched the moon from the center part of that mat! Yes, I know it looks gold in my photo, but it is all cut from silver mirri...it is just the glare of the light when I took the photo.
Our final mat was a crisp black, all layers then mounted on a white side fold card.

I am entering this leaping stag card over at Pixies Crafty Workshop, where you must use snippets.  I sliced out the center of the mirri mat, thereby creating my snippet to use for my dies and punches. The other ladies were showing me to just punch and die cut wherever, as it would not show...but I had an ulterior motive...a fun share for Di!
Posted by scrappymo! at 18:57 30 comments:

Here is another card made when I still healing from my cut knuckle. It is made up from bits and bobs on my desk.

I have somehow managed to tear the edge of one of the holly berries...Whoops!   I guess I will add some red stickles to try to hide it. 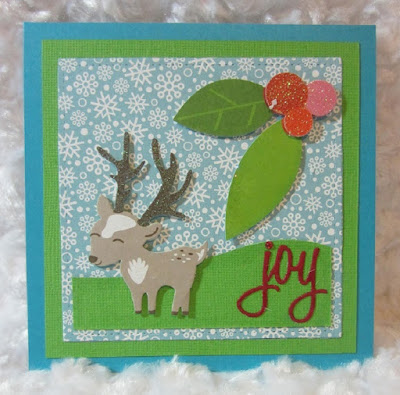 Only one snippet here, but will enter this card over at Pixies Crafty Workshop where you must use at least one snippet.

My knuckle is finally healed enough to start making cards again! I must add that they are simple cards with pre coloured images or cards made just from DP.  Although I can make a simple card, I am still having trouble placing my hand into a drawer of supplies, or pulling one item out of a pile of others as anything pressing against my knuckle is  still really painful.

My husband had a good chuckle as one of the things I struggle with at the moment is pull my debit or credit card out of my wallet! The pressure needed to pull it free is hellish on that index finger joint...I must admit that I have forced myself to manage it though!!!

My card today features a Hobby House pre coloured image from a sheet of various sizes called A Christmas Tale. They are all owls or birds and I think they are quite cute. I have made up the whole sheet of images but will just show you two of them today. 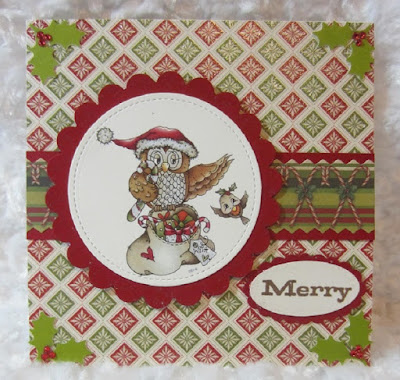 To solve the problem of pulling papers out of my stash, I just used DP from a 6x6 stack that was already  out on my desk. It is called Christmas Wishes from First Edition. The DP all have a fabric texture and many of the papers are glittered already. Bit of a bonus!

Not much cutting of papers here. I just trimmed up my DP to fit my 5 1/2 x 5 1/2 cards and then just added a K&Co border backed with a snippet of the same red Bazzill card.  Normally, I would consider that a waste of paper and would inset the border into the DP... But that way would have been more work for my hands.

Luckily, I had some pre cut Spellbinders scalloped circles already cut from the red Bazzill heavy weight card and had some Stampin' Up ovals already stamped with a variety of words mounted on some oval scalloped punched snippets of the same red Bazzill card.  Snippets of green metallic shimmer card were cut with a  Martha Stewart Holly punch and teensy rhinestones make up the berries.

The second card from this sheet of images is this adorable owl family. I used a strip of script DP from the First Edition stack and again I just laid it overtop of the background DP. Joy is from a package of script dies by Sizzix Tim Holtz and is called Script Holiday Words. 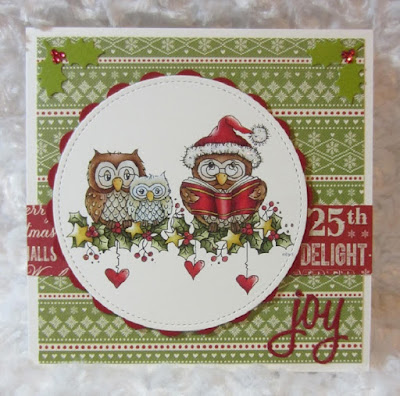 Pretty quick and fairly simple. A random dusting of stardust stickles on the image and the Joy script and these cards were finished!

I am entering this card in the following challenges.

The winning number is #3 KateP. Here is the photo of the random org selection. 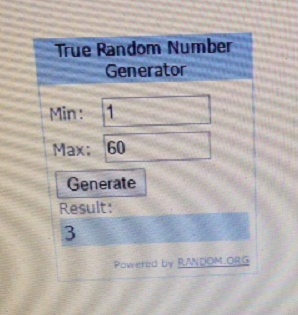 Please send me an email at scrappymo1@gmail.com and let me know your mailing address.
Posted by scrappymo! at 02:39 10 comments: