This is going to be a long post...Skip down to the card pictures if you do not want to be entertained with bits of my trip.

Still jet lagged but enjoying being home. It was 34 degrees outside when we arrived home and much hotter inside as the house had been closed up for a month! Today is supposed to be around 24 degrees and that break from the heat is much needed.

Our front garden hanging  baskets and front lawn are completely brown as the hose bib broke and so the watering system for the front garden failed. We have to get a plumber in as it requires cutting through the craft room walls and ceiling to reach the repair.  We have had to do this once before, so hopefully he can use the same access as was cut previously.

My card today is double meaning for me as not only is it my first Halloween card of 2018, but also celebrates the fact that we saw the musical Bat Out of Hell at the Dominion Theatre while in London. I think I may even scrapbook this card when I make up my London pages!

The singing and the acting in this performance was fantastic! The story was a little hokey for our tastes, but as DH said, it would be very hard to create a story that encompassed all the Meatloaf songs. I have been humming the various songs ever since we saw the production and can not get the songs out of my head! The performers got a thunderous applause at so many points in the production as well as a standing ovation at the end!

My card was made under the careful tutelage of Sue Tossell with whom I had the joy of visiting for a few days while we were in Britain. Sue has been to Canada three times previously, and spent a day with us each time, both at our house for lunch and then an afternoon of shopping and a nice supper out.

I learned so many things from Sue! We played with Tim Holtz dyes and  distress oxides and had great fun creating backgrounds which we then turned into card fronts. I shall be sharing these over the next few weeks. This background was created by wetting watercolour paper with with little powders called Brusho's. The effect is fabulous and varies according to the degree of wetness you work with, and the amount of powder you apply.

Sue has the largest selection of clear stamps I have ever seen! Beautiful Lavinia, Cardio, and much much more. She stores them by manufacturer on letter sized laminated sheets that store inside  clear/cloudy plastic cases. Each stamp has been stamped onto the card stock  it is to be stored on before it is laminated. Brilliant idea!

My background had a lovely moody, dark, foreboding feeling so I copied Sue and made a Halloween card. The stamps are by Lavinia and stamp like a dream. We used a stamping platform of course. Sue had one just for me to use, and so we were able to do the repeat stamping that watercolour paper sometimes requires.

So, here is my card. We each outlined our image in white gel pen...although if I remember correctly, I was too nervous to ruin this beauty so Sue outlined it for me!

I made it up into a card once I was home again. I used a snippet of  DP,  left overs of a 12x12 sheet. If you look closely, there is a snippet of a black and white DP sitting vertically behind the matted image.  This is truely a snippets card as the orange mats were also snippets. 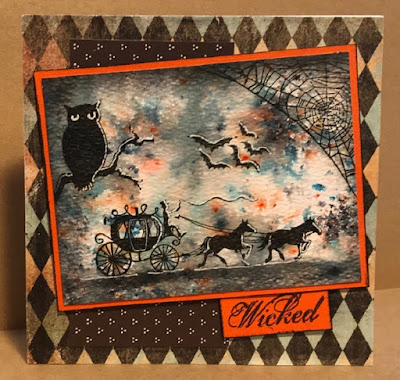 I used a snippet of a Halloween damask looking paper on the inside. If you look closely you will see the top edge of the pattern has a skull worked into the damask design! The Studio G  sentiment was stamped on the last snippet of orange card that I matted the front image with. 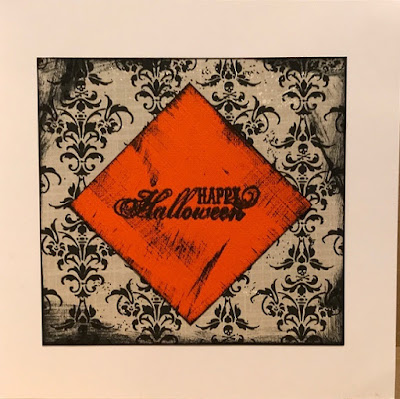 I usually off center the inside sentiment mats so as to leave enough room for signatures below the mat, on the actual card base. In this case, I decided to center the mat and will sign on the inside flap of the card.

I will leave you with a few photos from our days in London. We used hop on hop off bus tours to get around and it was amazing how much we were able to hop off and see. 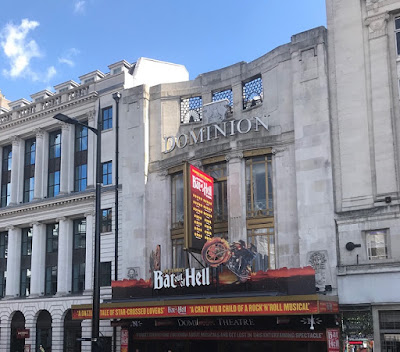 Here are some random shots taken from our bus tour.... 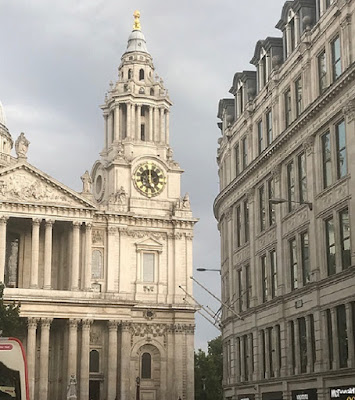 We stayed in a lovely hotel in Kennsington Earl's Court,  and also used the underground to get around as there was a station just a half block from the hotel.. This is just a random station shot taken from the doubledecker bus top. 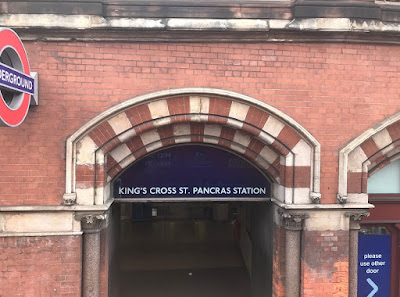 We did not go on the London Eye this time as we have had that pleasure on a previous trip, but I could not resist a photo. Sadly, London was the only time we had a break from the beautiful blue skies and hot, hot days. I rained several times during the day andthe skies were quite stormy looking. Not so great for photos, but good for the plants and lawns as there had not been any rain for over a month. . 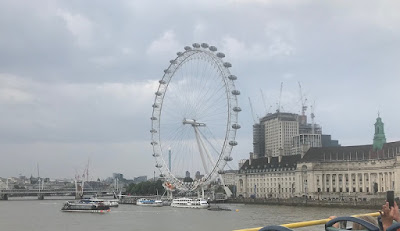 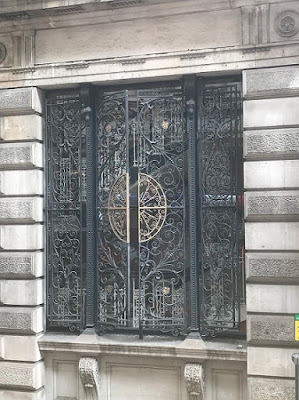 Had to take a photo of the lovely red buses... 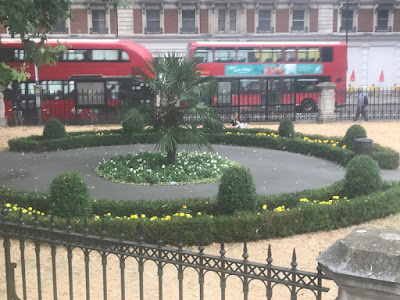 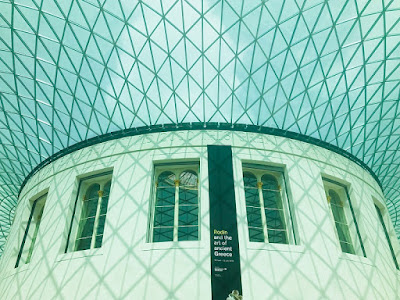 I am entering this card in the following challenges.
1. Pixies Crafty Workshop - must use snippets

Hi Maureen, I love your finished card it looks great against the background you made and teamed with the orange card too. We did have a couple of great days crafting together, I look forward to when we can do it again. I love your photos of London and am so envious that you went and saw Bat Out Of Hell, that will have to go on the wish list of shows I want to see (along with many others).

Your card is fantastic and I love all those ghoulish details!! So glad you had a fabulous trip and enjoyed yourself, and thanks for sharing the great photos. Now that song is like an earworm in my ear too LOL

What a stunning card, love the brusho background, it makes a perfect atmospheric scene with those gorgeous stamps. What a pity that with the glorious summer we had, you got the only cloudy days for your visit to London!

Wow Maureen, you guys were hot! So sorry about the failed watering system. It was hot here too but isn't anymore. Humid and rainy, yes. But I am glad we aren't in the path of the hurricane and I'm praying for those that are! So happy you had such a grand time in London. I love Meatloaf's songs so I can imagine how fun the musical was. I love the beautiful photo's you shared, such lovely sights! I especially loved seeing the London bridge as we always sang that song as a child. Not sure where it came from, but sure sang it enough! Your card is spectacular! I love the moody background you got from using the brusho's. The images you used are great as are the fun snippets of pattern paper! I would have been nervous about outlining in the white gel pen at this point too! You have made this panel into an amazing Halloween card my friend and I am loving it! Hugs, Brenda

That is an awesome card. So well designed. And it sounds like you had a great vacation too.

Glad you had such a nice trip! Your halloween cards are fantastic!

A fabulous Halloween card Maureen, you have created a wonderful scene.
Super photographs of London, I hope you enjoyed your trip, it certainly sounds like you had fun with Sue.
Pauline - Crafting with Cotnob
x

Two really lovely Autumnal cards, especially love the first one, a gorgeous scene with super images.
So envious of you going to see 'Bat out of Hell' the musical, actually didn't know there was one. Was a member of the Meatloaf fan club for years and I wasn't that young but certainly not as old as I am now.
Lovely photo's too.

Hi Maureen,
oh my what a very super designs and your background looks so awesome an brillianty created.
Sue sounds very orgainsed not a bit like me.
Great photos of your time here.
Such a great pity about your garden.
Lots of crafty love. Jenny. L.

Your Halloween card is absolutely wicked. I love your creation. Hugs Mrs A.

Hello Mo, what fabulous card, and looks like you had a fantastic holiday, thanks for sharing your photos.
What I pity I missed you in Inverness, it would have been lovely to meet, but I hope you enjoyed Scotland, and the Highlands in particular, not that I'm biased of course, Kate x

Great snippets card Maureen and just perfect for Halloween of course! Great to see your photos of London of course. To be honest, when it gets really hot in the City it can be unbearable so some cloud and rain wasn't a bad thing. I remember going to the Dominion Theatre when it was a cinema - to see the film Cleopatra just after its premiere! Long time agao now.

Enjoyed reading about your trip, seeing these great photos, and oh so delighted you were able to work in some craft time with a good pal. What fun you must have had, and this is a spectacular card. Love the spooky effects with the brusho-s and the Halloween elements. The brusho really worked well for that effect. Also great DP for the mats and backgrounds. Well done! Now you can rest up, and get the 'problems' resolved that were waiting on your return home. Take care. TFS & Hugs

What an amazing Halloween card, Mo!! I'm late, but I really enjoyed seeing your photos and reading about the journey!! Hugs, Darnell